Santo Vs. the Vampire Women in Freaky Monsters #7 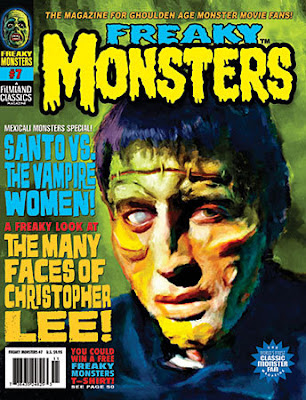 2012 is the 50th Anniversary of the best known Santo film worldwide--SANTO VS. THE VAMPIRE WOMEN, and FREAKY MONSTERS #7 has an article on the film by yours truly. It's somewhat of a preview of the article on the film in the forthcoming VAMPIROS AND MONSTRUOS book. I've edited out the racier bits (quite a few bits, actually, as I've investigated the film from a sexual angle, too) and there were a few "Freaky" additions from editor Ray Ferry, but otherwise it's fairly representative of the original text. The magazine preview is well-illustrated, too.

Interest parties may wish to order here.
Posted by Mirek at 6:38 PM