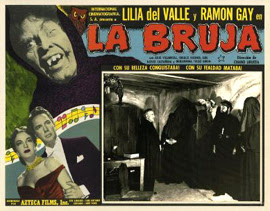 Several Mexican films from the early 1950s anticipated Mexico's horror boom that started in 1957 with El vampiro, and several key figures during this time emerged to later take advantage of their creative accomplishments. One of the most important members of this select group was director and scriptwriter Chano Urueta. In the space of two years, Urueta directed and scripted three films that would foreshadow and influence Mexico's forthcoming horror and lucha libre films: Monstruo resucitado (1953), La bestia magnifica (1953), and La bruja (1954). The story of the latter film, incidentally, was thought up by Alfredo Salazar, a few years before his brother, Abel, produced El vampiro.

La bruja tells the rather simple, yet effective tale of a woman's life-sacrificing love for a man who, initially, is very much out of reach for her because of his handsome looks. This woman is "la bruja," the witch, a hideous being who inhabits an underground world of outcasts and is regarded with loathing and suspicion even there. Made beautiful by a maddened doctor to carry out his revenge against the heads of a company that desired his formula and accidentally killed his daughter, "la bruja" falls in love with the only innocent high-ranking member of that company, Fedor, played by the debonair Ramon Gay, sans his usual moustache. 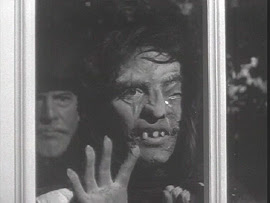 Chano Urueta deliciously crafts a sinister underworld of the poor, wretched and handicapped, a society lorded over by Paulesco, a sort of early and non-supernatural version of Coffin Joe. (Paulesco is played by the future "Dr. Krupp" of the Aztec Mummy films--Juan Aceves Castaneda, while the actor who played the Aztec Mummy, Angel Di Stefani, turns up as a beggar.) Along with the scenes featuring "la bruja" (whose look on the big screen must have been both shocking and riveting), it is these moments in the underground lair that resonate with atmosphere, artful camera positioning, and directorial flourishes. A black-robed trial of the "Tribunal of the Night" that takes place within leads one to surmise that Urueta is setting up a socialistic court date against the ruling class where the judges and jury are from the lower class, but we eventually realize that this society of outcasts is as to be feared, with its cruelty and baser passions, as the opulent and "respected" society above ground.

While one feels that Urueta is at home in this bizarre environment, the rendering of the apparent locale of the story--some unidentified Balkan country--is practically non-existent. The Churubusco studio where the film was helmed fails to duplicate any Balkan locale, and, it seems, there's little attempt to do so, despite the employment of Gunther Gerzso, with his Hungarian/German background, as production designer.

The connections with the European continent come, probably by choice, from some of the actors, however. Lilia del Valle, who assays the titular role, was born Lilián Welker Gundlach, which suggest a Germanic heritage, while the two villains in suits-- Jan and Gunther--are played by German-born Fernando Wagner and Austrian-born Charles Rooner. Even the non-Spanish speaker can recognize their careful Spanish diction.

A melodramatic horror film, a tragedy of beauty and beast where the beast is a woman and the beauty a man, La bruja is not as splendidly outré in its horrors as Urueta's earlier El monstruo resucitado; its aims are simpler and its rewards more straightforward, but welcome nevertheless.
Posted by Mirek at 12:56 PM 1 comment: 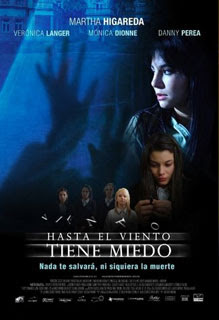 Based on the 1968 Carlos Enrique Taboada film of the same title, Hasta el viento tiene miedo (Even the Wind is Scared) was one of Mexico's big hits last year, seen by over one million audience members and coming in #5 in the top ten Mexican films seen in that country.

Here's a trailer of the film:

And here's a blog, in Spanish, which devotes itself to this remake:

No word yet on if this film will be seen in American theaters or on American DVD.
Posted by Mirek at 7:48 PM 1 comment: