Hope all readers of this blog are having a wonderful Christmas and holiday time, and that all will have a bountiful and happy New Year!

The coming year looks like a good one for Mexican horror. CasaNegra should be back with the two DVD releases (WORLD OF THE VAMPIRES and THE LIVING HEAD) that were held back due to financial problems, BCI/Deimos is continuing with their Mexican horror packages (we may even see the "lost" Santo film, El vampiro y el sexo, from the company), and, yes, finally the book Vampiros and Monstruos should see publication!

So stay tuned for an informative and entertaining journey into Mexican horror and fantasy!
Posted by Mirek at 10:57 AM No comments:

Wrestling Women vs. The Brainiac Trailer

Not looking so good.
Posted by Mirek at 7:58 PM No comments:

The Return of Mil Mascaras 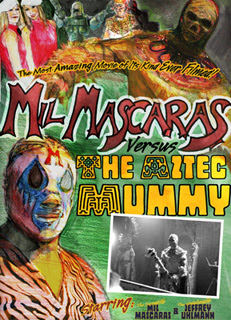 Folks who have been aware of Mil Mascaras vs. the Aztec Mummy, which was made what seems like two years ago, have been wondering what has happened to the film. It hasn't turned up in any theater (not that it necessarily would), and there's been no DVD release yet or update info on the official website of the film. For those who don't know, Mil Mascaras vs. the Aztec Mummy was produced in the United States by University of Missouri professors Jeffrey Uhlmann and Kannappan Palaniappan, using college talent and the services of Mexico's legendary lucha libre star, Mil Mascaras.

My suspicion as to the movie's absence has to do with the Aztec Mummy character, and the possible legal weight put upon the new film because it wasn't squared away with the Calderon film company, which claims rights to the character. And, sure enough, the film has re-emerged under a different title: Mil Mascaras: Resurrection--which isn't that great of a title. According to a poster on the Classic Horror Film Board (possibly Mexican film authority David Wilt under a different screen name), the film, or portions of it, had to be reshot to make it suitable for theatrical play. Another reason may be to rework the "Aztec Mummy" aspects of the film, if not elimiate them completely. (The mummy could now be called something else, for instance.)

At the heels of this production emerged another (!) Mil Mascaras film produced by the same duo--Wrestling Women vs. the Brainiac--which now has also been retitled to: Academy of Doom. One wonders again if the title change is indicative of a rights problem.

Despite these setbacks, I'm looking forward to seeing these films. I've read the script of Mil Mascaras vs. the Aztec Mummy, and thoroughly enjoyed it. The plot and dialog remind me of the tongue-in-cheek, but sincere spirit of the old Batman TV show. Photos from the film present a well-put-together effort. The poster on the CHFB endorses both films: "I have seen the mummy film and it is spectacular. The other film is also excellent but it is much less mainstream and will find its greatest appeal among the die-hard lucha film connoisseurs - which I am!" 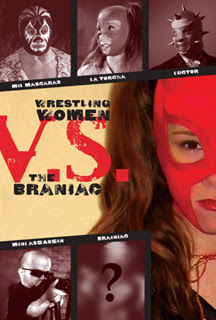