Above are TV trailers for two of the four Nostradamus films starring El Vampiro himself--German Robles--and directed by Frederico Curiel. Robles made these series of films in 1959 for Mexico's America Studios, which according to union rules mandated that films be shot serial-like, in episodes. K. Gordon Murray bought up these films for the United States, as well as the horror films from Abel Salazar, dubbed them, and then released them primarily to television, though a few saw limited theatrical release, sometimes after their television debut!

From the above trailers, it appears that trailers were made for at least two Nostradamus films. Note the lengthy silence that comes at the end, while the scenes still play out visually. This would be the place were a voice-over would announce where and when the film would be shown, if theatrically, or the time it would be shown on television.
Posted by Mirek at 9:36 PM 1 comment: 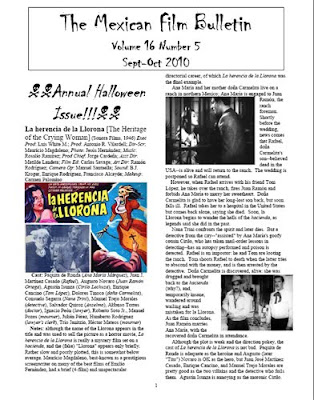 David Wilt is The Man when it comes to Mexican films, the supreme authority on all genres in Mexico's filmography. Since 1994 he has been publishing, either in hardcopy or online, THE MEXICAN FILM BULLETIN, which reviews all types of films produced by Mexico, including, obviously, horror and fantasy films. Wilt, known on the Latarnia boards and elsewhere under the name of Dr. Ling, is also the author of the mammoth and indispensable THE MEXICAN FILMOGRAPHY, 1916-2001 (McFarland and Company, 2004) and has written for numerous publications on Mexican films. He was also responsible for the informative liner notes for the Mexican horror DVD series released by CasaNegra.

His newest issue, which could be called a Halloween special with its horror film reviews, is available online as a PDF, and you can download back issues from this page.
Posted by Mirek at 8:06 AM 3 comments:

From Klimt Records comes this LP soundtrack of EL VAMPIRO and its sequel EL ATAUD DEL VAMPIRO. Music by the legendary Gustavo Cesar Carrion, who composed the musical scores to many Mexican horror films. 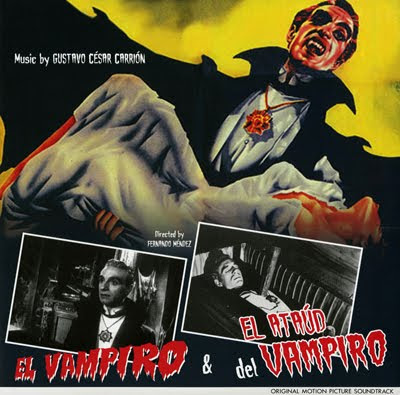 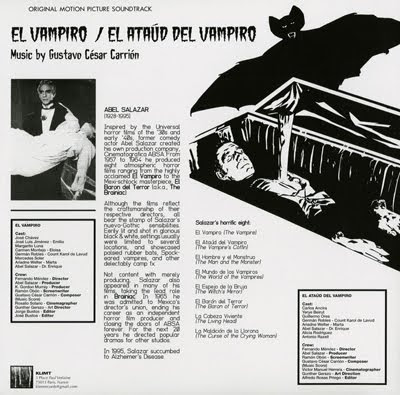 I have my suspicions as to how official this release is, as the cues are taken directly from the Spanish audio of the films (though they sound very good). Also, why on LP and not on CD?

Anyway, this record seems to be available in the United States, despite Klimt Records being, supposedly, a French label. Yeah, sure.

You can listen to samples here, which includes a cue from another movie, LA MALDICION DE LA LLORONA (CURSE OF THE CRYING WOMAN), also an Abel Salazar-produced horror film.