Creepy as all hell, EL MONJE LOCO premiered in Mexico in 1937 as a radio show, meeting with great success from the outset. Though I haven't heard any of the shows (the You Tube clip above gives a a snippet), I assume that "The Mad Monk" was the host of the horror series, rather than an active participant in them. So great was EL MONJE LOCO's success that in 1940 the character began appearing in the pages of CHAMACO as a horror host and on the screen in a film titled, what else, EL MONJE LOCO. In 1953, the Mexican Mad Monk got his own comic book that lasted until the early 1960s. Later that decade a new series of EL MONJE LOCO comics saw publication, and then another series that lasted 176 numbers. 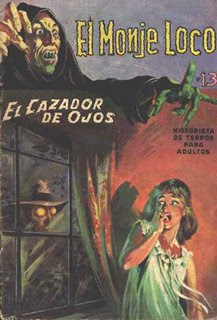 EL MONJE LOCO is a Mexican institution, and the character turns up in films, TV shows and print media, but is rarely talked about or considered north of the border, even among those with an appreciation for Mexican horror films.
Posted by Mirek at 8:01 PM 1 comment: