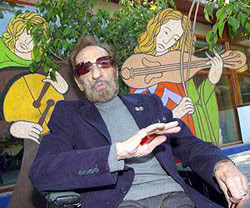 Yes, it's true. "El Vampiro" himself, German Robles has recorded an audio commentary for El vampiro, the Mexican horror classic that celebrates its 50th anniversary this year. Unfortunately, at this point in time, the commentary will only surface on a special edition Mexican DVD due for release in October. The DVD is being produced by Daniel Birman Ripstein of Alameda Films. Considering that CasaNegra Entertainment has inroads with Alameda Films (CasaNegra's Mexican horror DVDs are from Alameda's film holdings), it's possible that this important commentary will see a subtitled release here in the United States sometime in the future. CasaNegra already has a "Special Edition" DVD, released last year, of El vampiro and its sequel, El ataud del vampiro, but unless it's too late for a 50th Anniversary Edition of El vampiro, a "Special, Special Edition" may be warranted if sales of the first DVD proved satisfactory.
Posted by Mirek at 7:41 AM 2 comments: