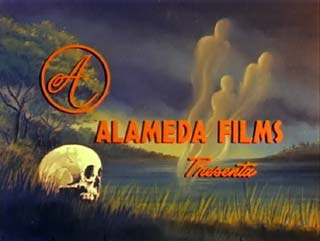 Artwork for the opening credits of El pantano de las animas
blooms in a version with decent color. 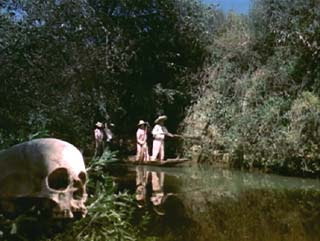 El pantano de las animas (Swamp of the Lost Souls/Swamp of the Lost Monster, 1957) is one of those Gaston Santos western horror films that most know in a faded color version, if at all. So it was nice to see a brief preview of the film on the French DVD of La marca del muerto (The Mark of Death, 1960), which I just received today. The colors are significantly better than what we saw on another Santos film, CasaNegra's presentation of El grito de la muerte (American title: The Living Coffin, 1959). Too bad CasaNergra never got around to showcasing El pantano before the company went under. Not that it's that good of a film. But it'd be nice to see in a good color presentation.
Posted by Mirek at 2:36 PM No comments: