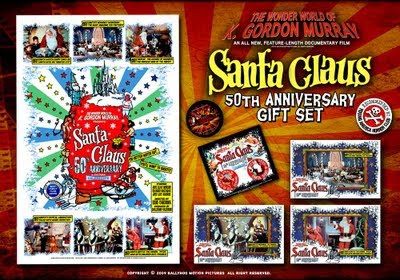 From our friend Daniel Griffith of Ballyhoo Motion Pictures and the Wonder World of K. Gordon Murray:

Just in time for the holidays!!! Introducing the "SANTA CLAUS 50th ANNIVERSARY GIFT SET", a great holiday companion for the MYSTERY SCIENCE THEATER 3000 VOLUME XVI dvd box set (which includes the infamous SANTA CLAUS episode and the companion documentary short... "SANTA CLAUS CONQUERS THE DEVIL", which I produced and directed)... or any cult film fan!

While you are at our BALLYHOO store, check out some of our other EXCLUSIVE items... including a "ROBOT vs. THE AZTEC MUMMY" T-shirt, a K. GORDON MURRAY POSTER SET, and MORE!!!
Posted by Mirek at 12:14 PM